Maintenance engine oil tappet adjustment will be neglected but not your engine custom vehicle suddenly engine malfunction may be.

Suddenly the engine output is heavily degraded…  It’ll be often in such serious state, Damage of a rocker arm and a cam is prospect in the case.

In addition, there is a harbinger to be in such a condition.

Even if it’ll be in the serious state, When a rough check of faults can be done, you don’t have to do an unnecessary thing.

Even on its own if that cannot be repaired, An estimate of the repair requests in a motorcycle shop, You can Parts payment guess at that time.

In the vicinity of cylinder head always ticking sound.

A rocker arm is the sound with which a cam is hit, so this isn’t abnormal. The bad situation is when a ticking sound is too loud.

Cause you can guess that is defects of tappet adjustment of the cam and rocker arm wear and tear. 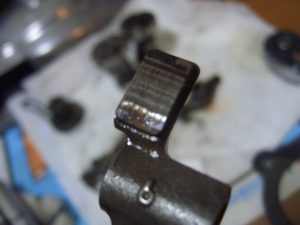 For example, in the rocker arm like this, A tappet clearance deviated substantially. (A gap is big.)  and Cam mountains should be lacking at the same time.

That are experiencing a fairly loud ticking, Will still not see a significant drop in engine power.

But when it’s being left, the situation that engine power falls suddenly occurs.

What happens? from if Rocker arm broken

The behavior is different at the air intake side and the exhaust side, Is about 30 km/h maximum speed.  In addition, engine output is almost gone, It’ll be acceleration ability slower than a bicycle.

Spark plug ignition is always in the state which became moist, But the engine starting is no problem…  It would be such situation.

When a rocker arm broke, Bad luck and broken part is rampageing within the cylinder head, with disastrous results.

The above image is broken rocker arm.

I broke the rocker arm about 5 times in the past, but The cylinder head and the internal part were safe.

I of that time would be lucky.

Even a normal engine sometimes breaks.

Because it’s new scooter purchase, it’s OK…  I also thought in such a way.

When a rocker arm broke with Cygnus X (SE12), I think it was damage by a hard engine custom,  But, BW’s 125 FI (SE4510) was a normal engine, and a rocker arm and a cam were damaged in the state never doing an engine custom.

Even if it was OK because it was normal, it was bad that confirmation of a tappet clearance was neglected…

It is noisy with ticktacks recently…  If you feel this way, Check tappet clearance as soon as possible.

I think it should be disassembly the cylinder head if you offset larger than the default value.

If the rocker arm in an unknown state, Please consult a picture of this new rocker arm.

I installed an automotive boost meter in the motorcycleThis remodeling is made easy even for beginners, I think that th...

What happens if the Spark plug 5 years 27000 km is allowed to stand?

I never exchanged spark plug ignition for 5 years after BW'S125 was bought. Cylinder head adjustment in the meantime...

Cygnus X, the engine oil exchange of BW'S pull engine oil out of a drain bolt,I think there are people who actually pul...

careful to not bend exhaust pipe flange and bolts

I think many people to replace the silencer and exhaust pipe of the motorcycle or moped scooter custom. There are ma...

A RPM muffler will be a muffler of JMCA official recognition. The volume is high-pitched, and there is not it noisil...

The final point of the scooter engine custom will crank,This is the most difficult places in the engine custom. Cran...
スポンサーリンク
Closer look straight groove torque cam
BW’s125 Tuning Points to note in the throttle body connector removal