Likes and dislikes are Opinions vary by a person into strengthening in a clutch center spring.

Basically, if you want to focus on the highest speed, You should not strengthen the clutch center spring.

But that’s sometimes effective, For example, situations in which a slip of the V-belt occurs when you increase the engine power.

If you want to change the clutch meat timing, A clutch center spring isn’t exchanged,

It made possible by changing the spring force of the clutch spring.

Exceptionally,The situation that it’s oily by oil seal degradation of a crankshaft in the crankcase, and An exchange of a crankshaft oil seal is troublesome, Or when it isn’t possible, There is also as a simplified V-belt slip way.

But please regard this as first aid.

There are various %, in the case where the net search and try to buy a center spring.

Generally a lot 5% to 10%, I think there are a lot of people who don’t know which to choose.

But that’s have enough money and the person to whom remodeling is accustomed.

The choice is difficult for a beginner, So well I do not know.

buy a 10 percent likely to have power…..

I think there are a lot of people who choose 10% by such reason.

When I was a beginner, too, it was so.

This is the center spring I began and bought.

I do not understand the meaning of % in those days, too,

I bought in such a reason.

As a result, I will purchase several kinds of clutches center spring later.

You should think well about “faster”

Because it’s a vehicle of a driven engine, I think about faster absolutely.

Going to have to understand is, not as I think I actually do a drive system custom faster…

Such a situation may occur.

I think that this is why, for many information of the CVT drive system tuned to the Internet.

That my domain name was made cvtmotorcycle.com, this is a reason.

Everyone is the world the case for CVT custom would pursue the respective faster.

It is difficult to achieve an achieve both maximum speed and acceleration force UP in the CVT custom only.

If you aim to balance will require complex custom,

For example, it is the engine custom, high gear, custom tire diameter.

But it becomes a full-tune custom, It becomes the form similar to the vehicle for the race of the another thing to be normal.

For this reason, the clutch center spring change Let’s organize should be to how their own vehicle.

Center spring 10% UP in case of normal engine,maximum speed will be considerably reduced .

When it comes to near the limit speed will undulate  from the engine Sound.

And UP of acceleration feeling can be quite experience. But dissatisfaction with the maximum speed will occur.

Even if the weight roller is made heavy, the max speed doesn’t rise, You will seek a further engine power.

3% ~ 5% UP is obtained is decent acceleration feeling,Thus, this is recommended in the normal engine.

If it is 3% or 5%, shifting of the oneself preference is possible by weight roller setting.

Change of the clutch center spring strength brings a significant change in the speed,

However, a result of the various changes , You will understand the goodness of the normal clutch center spring. 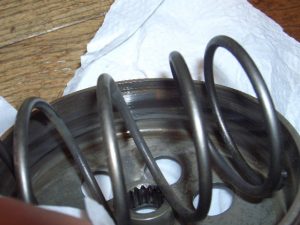 If the first to make a change of the clutch center spring in the normal engine,

It will become what Other CVT tuning parts is tailored to all modified clutch center spring.

A clutch center spring is so influential.

So paint the lubricant so that it does not rust, Let’s save it in Plastic bag.

An exchange of a pulley and a weight roller is the custom which is Famous in the drive system custom, I think there a...

People to the tune-up of the drive system is frequently done the exchange of weight roller, Such person will know that w...

Secondary Fixed sheave was damaged, so it was exchanged new one. This work needs Rotor Holding and Clutch nut wrench....

By changing the clutch meet timing, start accelerating UP

Do not Disassembly the Starter clutch

A starter clutch was hard and didn't come off easily at the time of a crank exchange. It was pulled by force by vario...

Torque cam will be an important component in the amount of force allocation of the continuously variable transmission. ...
スポンサーリンク
Pulley face metal cutting processing to Increasing the spline area
Exchange the gear oil for scooter Ending in 15 minutes