Gear oil is different from the Way to handle and time to replace by the manufacturer or model.

Moreover, it is oil that forget sometimes some people do maintenance on their own.

People who do not maintenance in the beginner or yourself of often do not even know the existence of the gear oil in the scooter I think so that it is status quo.

So, if you had a look at my blog, there is no choice but to exchange … It’s a joke .

I think so,If perhaps, I wonder scooter is not than often is discarded in a state that does not exchange once the gear oil from the new scooter?

But when this is considered paradoxically,

Gear oil is unknown what happens in also may also free exchange without exchange.

Such a scooter is lonely and considered to be discarded when it becomes a situation of such performance down or V-belt damage due to the weight roller exhaustion.

Caution:That I know is the only gear oil of Yamaha Corporation scooter,But it or was a structure, such as where was also fairly similar.

Gear oil exchange work is the completed in 15 minutes.

If it is easier than engine oil exchange and there is a slight tool, it is over immediately.

At first,let’s get rid of the cap of the gear oil,Simply turn grabbed with pliers.

If you feel that this is dangerous,Let’s again challenge after impregnated with lubricant. 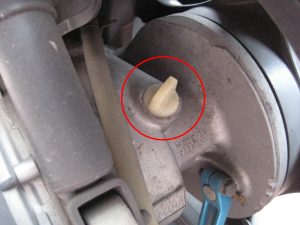 Red circle portion of the image will be the gear oil cap.

This is made of plastic, if you have broken it can be easily removed with an electric drill. 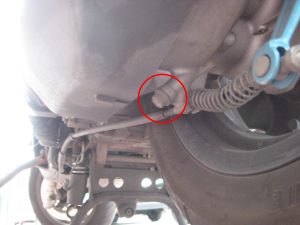 Red circle portion of the image is the drain bolt.

The discharged gear oil amount is 100cc-150cc in case of 125 motorcycle of engine displacement.

Different emissions by the vehicle, Please refer to the service manual.

Change of Ride is not felt.

Well, it is the favorite challenge for the gear oil from here …

What happens , that it is oil is not a gear oil? 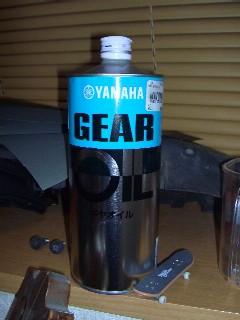 Now,I am using the gear oil of genuine Yamaha…

But when you’re seeing my blog, You’d be able to imagine the act I seem to do.

Of course, engine oil was put.

In addition it was a beginner without having to worry about the amount of gear oil,The engine oil and gear oil was a large amount put.

What? You want to know how much was put in?

This is not a maintenance action…

as a result,Change was not felt.

This is the same impression both of the genuine gear oil, engine oil.

I changed the oil by a no groundless in expectation.

But a friend familiar with motorcycles and listen to, and He say me, stop it Now.

And at the same time Gist of the story, exchange measure of gear oil has to know also the fact that the 5,000 kilometers from 3,000 kilometers.

By the way, I think 2000 kilometers was running from beginning to change the gear oil…

Then it was changed immediately the gear oil in the proper amount.

Discharged gear oil is my mix oil,I did not know there is a accident.

The story is the end in this.

Maybe I was just lucky

Increase the acceleration force in the long pulley boss

Acceleration of the start becomes high output by expanding the operation reach of the pulley. For that purpose, let's...

Likes and dislikes are Opinions vary by a person into strengthening in a clutch center spring. Basically, if you want t...

Torque cam will be an important component in the amount of force allocation of the continuously variable transmission. ...

Do not Disassembly the Starter clutch

A starter clutch was hard and didn't come off easily at the time of a crank exchange. It was pulled by force by vario...

Secondary Fixed sheave was damaged, so it was exchanged new one. This work needs Rotor Holding and Clutch nut wrench....